Sometimes it takes a visit from someone out-of-town to discover local attractions.  Here’s a fun place we discovered on our way home this afternoon.  It was a little tricky to find because all signage has been removed and it’s right off the road, up a few feet along the base of an interesting rock formation/cliff.  This site is just a few minutes from the Mission Home. They say these rocks were painted by Indians a long long time ago.  Here’s the report on Wikipedia: 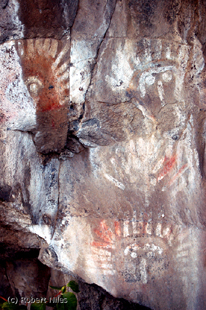 Indian Painted Rocks is a tiny state park (approximately 2,000 sq ft (200 m2)) right outside Yakima, Washington at the intersection of Powerhouse and Ackely Roads. The Indian rock paintings, also known as pictographs are on a cliff of basaltic rocks parallel to the current Powerhouse road which was once an Indian trail and later a main pioneer road that connected the Ahtanum valley to the Wenas mountains.

The paintings were originally thought to be only a few hundred years old but it is likely they are much older than that – possibly over 1000 years old. The pictographs were painted on the cliff when a prehistoric lake submerged the bottom. The natives painted the cliff from canoes using organic materials.[1]

The state park was acquired from the Yakima Valley Canal Company in 1950.

A sign erected by the Washington State Highway Commission at the park’s entrance states the following: Origin of these paintings is unknown to present day Indian tribes of this region. They are similar to many others found in western North America and are often interpreted as depicting religious experiences, as well as records of hunts or meetings with other tribes. This location was on the old Indian trail which ran from the Wenas Mountains to the Ahtanum bank of the Yakimas. In 1850’s, miners en route to British Columbia gold fields used the same trail. Later, as Americans settled the Yakima Valley, a stage coach route passed these cliffs.

In early 2007, the state parks department closed the Indian Painted Rocks park because of graffiti. There are plans to restructure the park in order to protect the painted rocks.
—————
Here are a few photos I took today.  We hiked up the little steep trail by the white (no trespassing) sign on the right.  There is a short trail along the base of the rock formations, which are quite interesting in and of themselves.

Here’s what we saw when we got there:

The thing I enjoyed most about seeing these faces on the rocks is that they felt Happy!  Maybe they are 100s of years old, or maybe even a 1000 years, but no matter when they were painted, it feels like they were a happy sign to others passing this way.  We drive by these rocks almost every day, and now I will feel even more happy as we do, feeling the goodness of this path we are all on.

Thank you for visiting! I hope you enjoy the things shared here.
View all posts by Ann Laemmlen Lewis →
This entry was posted in About Places in our Mission. Bookmark the permalink.